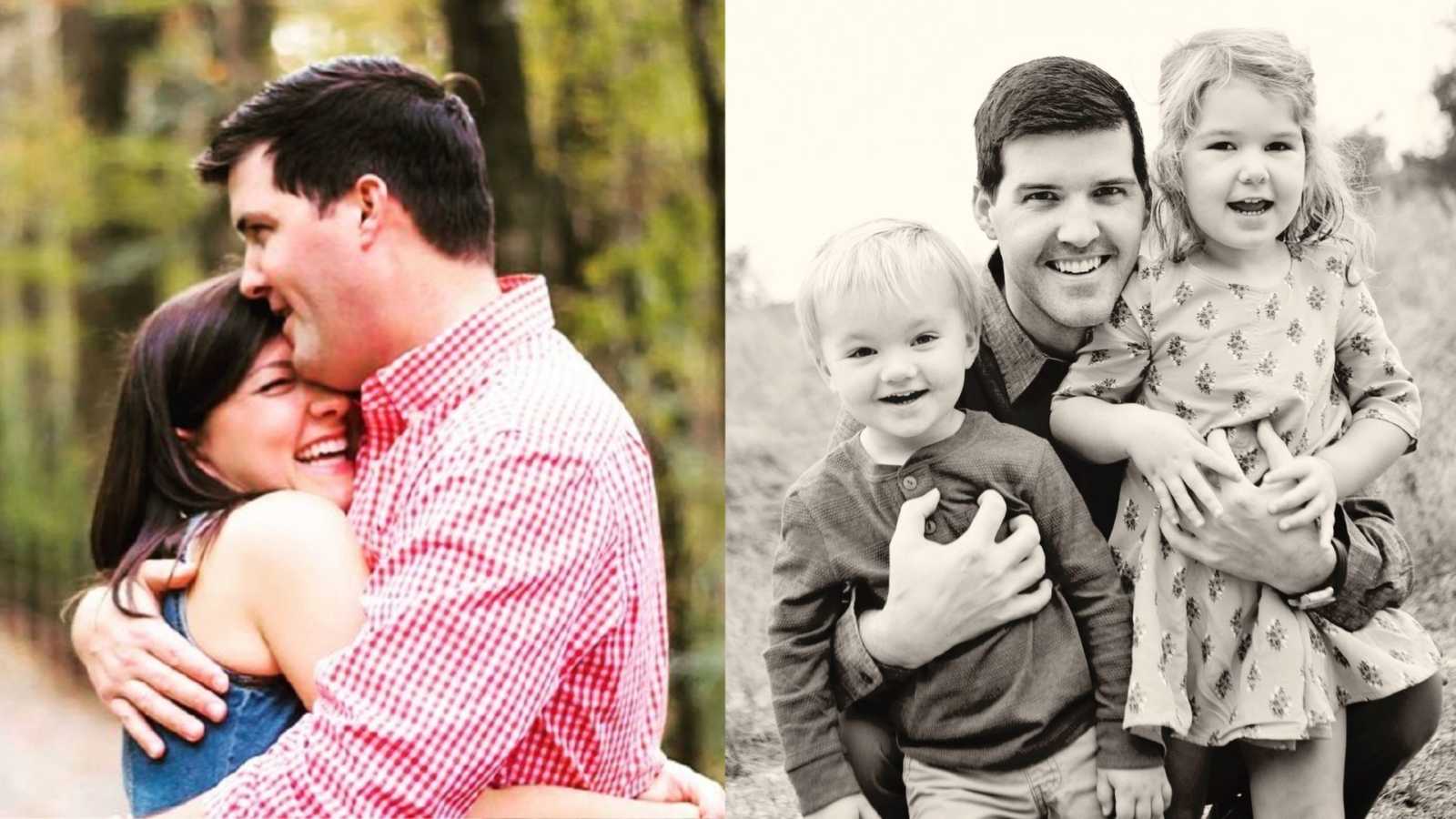 “I am well-acquainted with sorrow. This unwanted friend entered my life at an early age, when I lost my mom to cancer at twelve. I had to learn the harsh reality that God’s answer to healing can be ‘no’ and that your people can really die. At the same time, God was giving me an understanding of himself that only comes through suffering. This understanding of God would be crucial to me in the years to come.

Fast forward many years later and I would meet my husband Brad in college. We fell quickly in love. After dating for 6 months and being engaged for 6 months, we were married.We had that easy kind of love where everything just fell into place.

Three years into our marriage, Brad began having abdominal pain off and on that would lead us into the ER. A scan would reveal that his spleen was enlarged and he would need surgery. The day of surgery unfolded differently than we could have ever imagined. The surgeon came out to explain.

‘What I found inside of Brad’s abdomen is ugly. Cancer is on the table,’ he said.

Our whole world was turned upside down in a moment. Pure shock swept over us as we awaited the news of his diagnosis. Four endless days later, we received the news that Brad had an incurable cancer that only gave him a 15% chance to live five years. We were left feeling hopeless and defeated before the fight even began.

The first year of treatment was intense. Brad underwent multiple surgeries, radiation and 10 rounds of chemo. At the year’s end we received the news that he was in remission and we knew that this was nothing shy of a miracle. Still aware that we were on borrowed time, we tried to enjoy and celebrate our days together. We began to dream about starting our own family. Knowing that the cancer would most likely return, this decision was not easy. Brad could not reckon the idea of leaving me as a single mom and his children fatherless. But, I could not reckon the idea of not having a piece of him here with me on earth.

We did not want to let cancer dictate our every move, so we decided to take a giant leap of faith. Due to the effects of chemotherapy on Brad’s body, we entered the world of fertility treatments. After two rounds of in-vitro, $15,000, hormones, and tears, we were pregnant with a precious baby! Nine months later our daughter, Nola Bradley, was born. She was our big sigh of relief. My little family was all together, happy and healthy. Everything seemed right in our world.

The week that Nola turned one I began feeling very physically exhausted and nauseous. I almost felt pregnant, but I knew the odds of this were very slim. Brad had been declared sterile just months prior. The first three pregnancy tests I took were negative, and then the next 15 were POSITIVE. We had a miracle baby on the way!

Three days after my positive pregnancy test, our life would take another turn for the worse. Brad’s scan revealed that his cancer had returned, and he would be back in the fight for his life. It was Desmoplastic small round cell tumor, a pediatric cancer- soft tissue sarcoma. We knew that no one had ever survived a recurrence from this disease.

The daunting reality of the cancer’s return felt like a cruel joke and a death sentence. We went from the highest high to the lowest low in the matter of 72 hours. In our own strength we were a mess, but God was sustaining us as we continued to put one foot in front of the other.

Nine months later, in the midst of chemo and clinical trials our precious baby boy, Grey, was born. His birth felt both joyous and sorrowful.

Brad’s body was responding to treatments and the cancer seemed to be slow-growing, until the end of 2016. Scans revealed the cancer had moved into his liver. Due to the rarity of his cancer, there were very few treatment options left. One of our doctors told us to go home and enjoy the time that we had left. Brad did not take that as an answer, he wanted to keep fighting. I began to pray for 120 more healthy days together. God would take my 120 days and stretch it into a year.

We tried everything from green juice to experimental surgeries, but the cancer was growing out of our control. At the end of that year, the cancer had spread all over his body and Brad was placed on hospice. We were both weary travelers and the news of hospice was the most bittersweet relief. The bitter sting of watching a disease take over the body of your once strong and full of life husband was too much to even comprehend. But, there was this sweet relief knowing the pain would end soon, and that Heaven was just around the corner.

Brad was on hospice for 30 days before he went to be with Jesus. He lived his days with intentionality, and his last days were something I will never forget. His eyes were on Heaven and he was calling all of us to look with him. His burden was light and he had an unshakeable peace as he stared death in the face.

Nineteen months have passed and I am still very much in the midst of my own grief. Picking up the pieces of what death has left behind and walking my two young kids through the pains of loss brings back that familiar feeling of sorrow. There is no doubt that widowhood is a holy space. It is a space where Jesus has met our sorrow in the most tender ways, proving over and over that he will never leave us.”

This story was submitted to Love What Matters by Stacey Booth. You can follow her journey on Instagram. Do you have a similar experience? We’d like to hear your important journey. Submit your own story here, and be sure to subscribe to our free email newsletter for our best stories.

Read more stories from those experiencing grief and loss:

‘My 30-year-old husband who was never sick, was constantly downing Pepto Bismol. He started eating less than me. He was missing work, which he never did. I knew something wasn’t right.’

‘John was my PATIENT, and I was married. With tears streaming down my face, I looked at him. ‘Do you want to get married?’ We held each other in the tightest hug, and just sobbed. Hard.’ 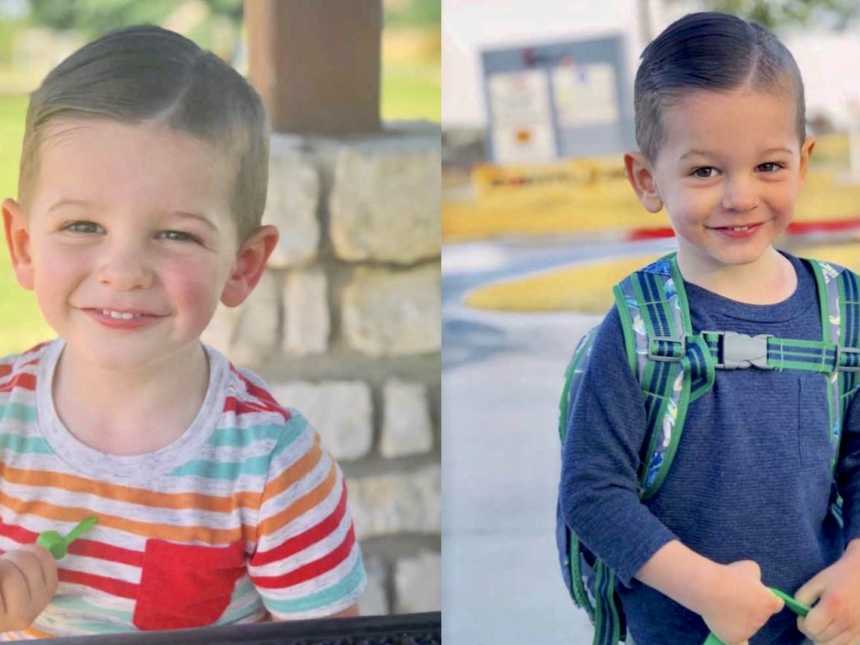 ‘My son’s teacher recently friended me on social media. I came upon a picture of her holding a chalkboard sign that read, ‘I said YES!’ She’s already married, so it struck me as odd.’: Mom thanks ‘hero’ teachers

“Until I read the caption. I couldn’t stop crying.”