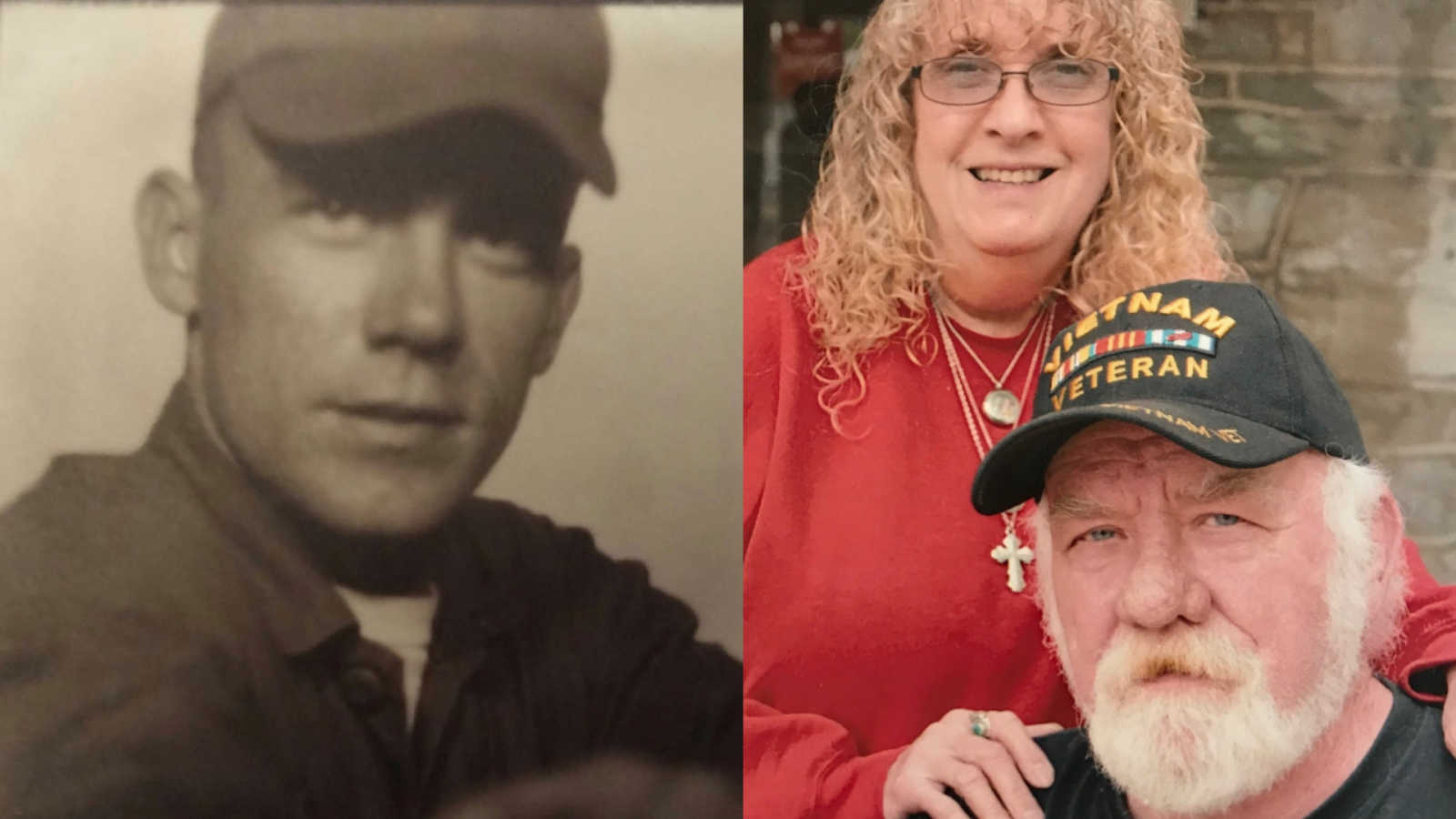 “For as long as I can remember I have loved to write. Not books, but stories. Mainly stories about people. I love to listen to what they choose to share. What they think is important to share with me, knowing I will share with others. Recently I have been sitting down with veterans and I realize I am in way over my head. I have no right to take on this responsibility, to attempt to put into words what they are willing to share with me. To sit with them and watch them go back in time and every moment, every sound, every feeling is so raw that I feel if I were to touch them, it would be a jolt to their being to come back to me sitting across from them.

Recently I had the honor of sitting down with Larry Carter, E5, 1st Cavalry, Vietnam Veteran and one of the most humble men I have ever met. I have been carrying around my little book with all the notes I take on the people I talk to. From the moment I walked away from Larry and his wife Carol I have carried my book with me holding on to it in the hopes it will give me the power to use his words to impart the feeling I felt as he sat and told me about who he became after his return from Vietnam. How Vietnam is a battle he chooses to remember every day as his survival, his therapy, in the hopes that not one of the soldiers lost there will ever be forgotten, at least not by Larry Carter.

What is it that takes them back to feel every sensation they felt when they were at war? Unlike a memory, where most of us struggle to remember details, theirs are always sitting on the surface of every nerve ending waiting to come rushing back, to make them feel, to make them remember, to make sure they never forget.

What does it feel like to want to forget bits and pieces of your past but knowing that you won’t, you can’t? To know they will always be there waiting, like a German shepherd, for the moment to come out with teeth bared, to feel a memory as if it’s happening again. And then you are expected to forget. To move on. To let go. To stop the tears that flow in the darkness when no one can see because they wouldn’t understand.

There is a new definition of who you are. It is molded and remade, leaving behind the person you were before you experienced war and building the new you filled with open wounds, sometimes externally but always internally. You are returned to the place you left before the war, and you are expected to be the same person you were before you left. You do your best to oblige, but you want to scream at the top of your lungs that you are not. You will never be. You want to tell them it was hell, but you realize there are no words to explain what you saw, what you survived, the weight of carrying the memories of those who will never come home. You realize you will spend the rest of your life pretending you are who you were so you can try to make it stop, you can try to reach back and erase your past but deep down inside, you know in your heart and soul that it will be impossible. You will never be you again.

Larry grew up in Lawrence, Massachusetts. He was one of five children raised by his mother, who was a licensed practical nurse (LPN). As a teenager he didn’t think much about what he wanted to be, but as he reached the age of 18 and we were at war with Vietnam, he realized he was probably going to be drafted and rather than waiting, he signed up. He always planned on being a Marine but a girlfriend at the time thought that would be too dangerous and thought the Army would be a safer choice. He joined the Army and in 1969 Larry Carter went to war in Vietnam. Thus began the journey to become the new Larry Carter.

His deployment was supposed to be for a year. About 9 months into his tour he was given the option to get 30 days leave to go home if he agreed to add 6 months to his one-year deployment. He had a fiancé back home he wanted to see, so he signed on the dotted line and headed home for 30 days. While home their engagement ended, and he had an additional 6 months to look forward to in the jungle.

Larry’s story isn’t about what he saw, what he survived, what he did in Vietnam. His story is about how he survives every day since he came home from Vietnam. He came home to a bitter country. The hippie generation who believed in peace, love and drugs. They were angry that we were fighting a war in Vietnam. The fact that our soldiers went willingly because of their commitment to the military they joined or because they were drafted and they were following orders made no difference to those that didn’t have to go. On his way home, they were told to remove their uniforms and put civilian clothes on before they landed – Larry did not. They were told to not mention they were back from Vietnam to civilians. They were supposed to be invisible soldiers, to blend back into society as if they were never gone, to pretend they were never at war.

For Larry his welcome home was in California where his sister was living. He went to her home, in uniform. She was enjoying the freedom that came with being a hippie in those days and the house was filled with her friends. The day he arrived she overdosed on drugs and when the ambulance came to pick her up she looked at him and said, ‘I wish you had been killed over there.’ She survived her overdose, but they never spoke again.

Still having a year left to serve in the military when he returned, he was sent to Fort Meade, Maryland, for 6 months and then on to Fort Indiantown Gap where he spent the last 6 months of his career as a non-commissioned officer (NCO) training soldiers in a replica of a Viet Cong Village on base before they headed overseas. When he finished his time at the Gap he decided he liked this area and was going to stay.

He worked for a year in construction and then moved on to work at the Lebanon Steel Foundry for 14 years until they closed. From there he became a truck driver for IMC Insulation in Lebanon for 27 years, retiring 3 years ago.

After Larry returned, he decided he wanted and needed to do something so the soldiers that never came home would never be forgotten. It will be 26 years ago this November that Larry started doing the Field Cross at ceremonies. His group has been at the Annville Memorial Parade every year. If you have never been to the Memorial Service immediately following the parade you really should. To see the Field Cross enacted and narrated is one of the most emotional displays of what Memorial Day means – to remember those that gave all. In 2015 he and his wife, Carol, and a group of Vietnam Vets performed the Field Cross ceremony 19 times.

But Larry doesn’t stop there. He spends a lot of his time coming up with ideas of ways to ‘remember.’ It is not only the Field Cross but actual ceremonies to honor and remember. Once he solidifies his idea his wife, Carol, works on the narration/explanation for the ceremony and fellow Vietnam Vets come together to put Larry’s ideas into a live memorial ceremony. From there he finds opportunities to perform them. Together they honor the commitment Larry made to himself and those lost in Vietnam.

When I asked Larry if there was anything good about Vietnam he responded with an immediate, ‘No.’ I asked him about committing his life to the ceremonies, the hard work of making his ideas a reality, the emotional toll it takes on constantly being reminded, constantly remembering things most try to forget, the sadness and memories it stirs every time they are performed. He replied, ‘It’s my therapy. It’s how I have learned to survive.’

Larry has redefined who he is and from my observation over the years and in the time he shared his story with me, this is who I think he is. He is 1st Cav. He is a Vietnam Veteran. He is tougher than nails. He is often on the verge of tears. He is the best man that any one of the soldiers lost in a war he can’t forget could have on their side. He is my HERO!”

This story was submitted to Love What Matters by Becky Gacono of Annville, Pennsylvania. Submit your own story here, and subscribe to our best stories in our free newsletter here.

Show your love for the military heroes around the world. SHARE this story with your friends and family. 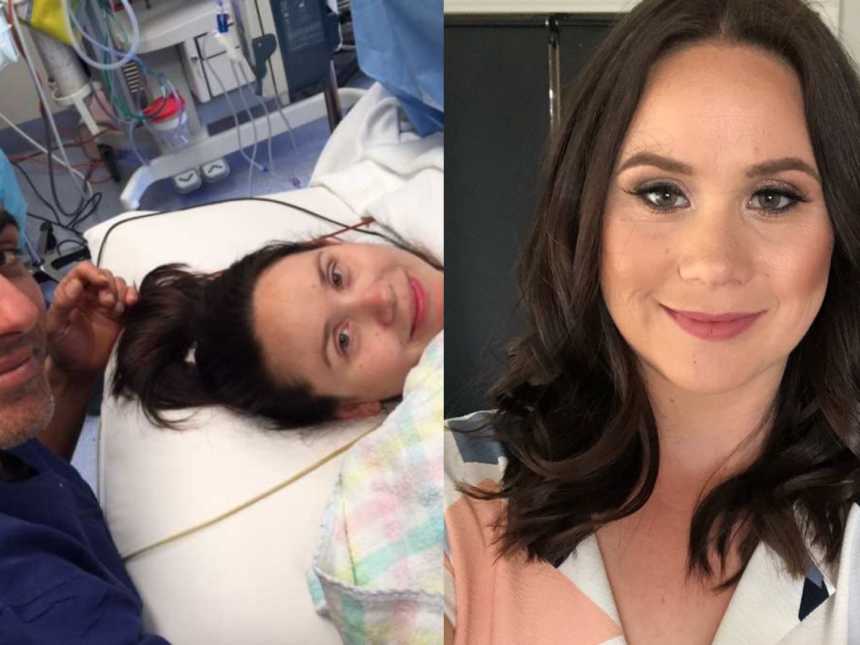 ‘I hadn’t even held my baby yet when the doctor came in. ‘We’ve found a growth. You need to come back in 2 weeks.’ I lost it! The happiest day of my life quickly turned into the worst.’ Cancerous growth found on woman’s labor day

“I remember my husband crying. He never cries, so I knew it was serious. I had a new baby and two small children at home. All I could think was, ‘I’m gonna die. I’m not gonna see my kids grow up.’ I’d started bleeding at 6 weeks pregnant. I had 20 ultrasounds and everyone said the baby was fine. But I knew something else was going on.”