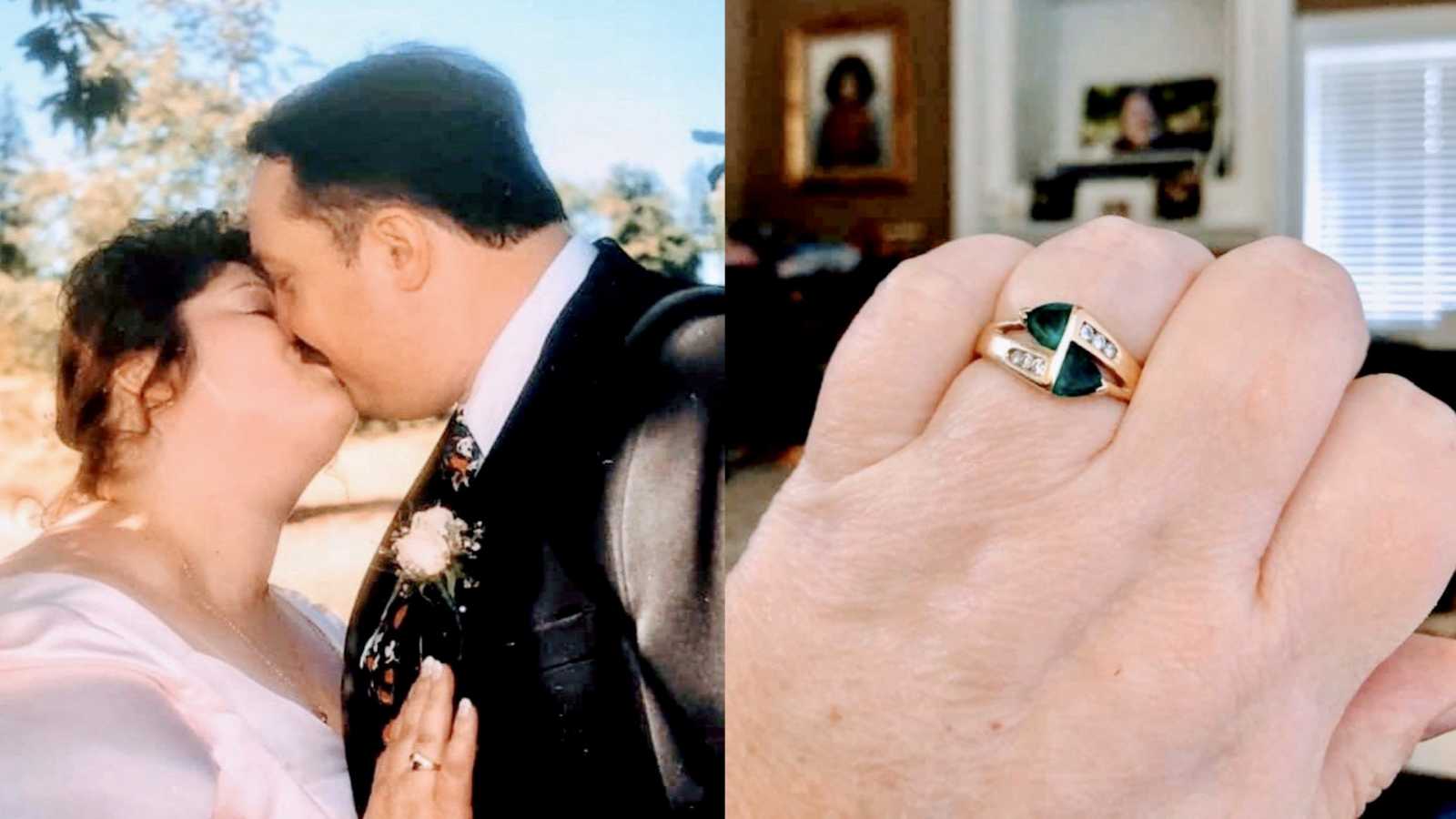 “I got engaged in the Costco parking lot.

It was a dark and stormy night… and Manny (the dude I am married to now) were making our monthly Costco run. We walked by the jewelry section and I spotted the most unusual, prettiest emerald ring. We’d been talking marriage but that’s it, we just talked about it. As we paused Manny said, ‘nice stuff’. I said, ‘yes the emerald is gorgeous.’ Manny was non-committal. About that time one of the Costco employees meandered over and asked us if they could answer any questions we might have.

I spoke up, and said ‘Yes, how much is this ring?’

I was floored! But then again that’s Costco.

I looked at Manny and he looked at the guy and said, ‘Thanks we are just looking.’

Manny looked at me and said, ‘Hey let’s head to the wine section. So, we did, and I looked over my shoulder lovingly at this ring and we were on our way.

Winding our way through the wine area I had the strongest urge to go look at that ring and at least get its order number. I told Manny I needed to go to the restroom, and I’d be back.

I made a bee line over to the jewelry case to find the ring, the Costco guy, and the order number. I find the guy all right, but the ring was not there. I couldn’t believe it. He said simply, ‘I am sorry, right as you left another couple came by and bought it. Things just don’t last at Costco; they come and go.’

I nodded miserably and went on my way.

I stomped all the way around the stupid store looking for Manny. I was on my ear, super irritated, and pissed because I realized I loved that ring. That was the ring I wanted. I found my guy. He saw the look on my face and asked what was up. I told him that I’d gone back to look as I loved that ring, but it had been sold and I knew we should have just purchased it and put it away.

Manny just shrugged and said, ‘There will be other rings, after all its Costco.’

The rest of the time in Costco I spent in stony silence. Like a petulant teenager, I guess. We arrived at the check-stand and Manny begins to argue with the clerk. He was being a complete and utter douche canoe -a royal tool.

As we finished ringing up, he looked at me and said, ‘You need to take these out to the car and put them away. I need to speak to the manager this muffin is an idiot.’

I did a double take. He never spoke that way to me or anyone else. I asked him if he was having a stroke. He growled at me and said, ‘For, once can you just do as I ask you and not argue.’

By now I was pissed, and I flipped him the bird in the middle of Costco as I silently planned his death, I took the stuff and out to the car I stomped like a pissed off toddler.

As I try to open the passenger side of the car door it’s locked. It’s pouring. I am cold. I am angry with Manny because I think he’s a jerk, and I am so sad about this ring. He finally comes back and gets in the car and unlocks my side.

I get in the car. I fasten my seat belt. Manny says, ‘You’re sitting on something.’

I give him the side eye and say ‘No I am not. And I am not speaking to you.’

I unfasten my seatbelt and make this big theatrical show of proving to him he’s full of sh*t. I get out of the car and look and what do you think is there?

He said. ‘Go on, open it.’ His eyes were dancing with anticipation and joy.

I opened the box and it was that damn ring. It just started bawling.

He then said, ‘Do you remember our first date?’ I nodded and croaked out ‘We went to dinner and then shopping at Costcooooooo.’

By now it’s the ugly cry.

He then said, ‘I think it’s only fitting to ask you to be my wife and marry me in the place it all began.’

But I still couldn’t figure out how he managed to pull off the biggest stunt ever. He took great delight sharing with me how he did it much like a magician knows his tricks.

He got the attention of the jewelry clerk. While I was prattling on about the ring the clerk was standing behind us and Manny was pointing at the ring and making motions, he wanted to buy it.

When I went to the restroom, he and the clerk began to decide how to buy the ring without me, but I walked up.

The clerk was pretty smooth in telling me it had been sold. I left and they decided to stage a fake fight and send me out of the store.

This story was submitted to Love What Matters by Marna Dee, 56, of Portland, Oregon. Submit your own story here, and subscribe to our best stories in our free newsletter here.

‘My heart was pounding. My husband had been gone for 3 years. I’d completely written off ever finding his phone.’: Widow’s discovery on late husband’s phone solidifies she’s ‘marrying the right guy’

‘He doesn’t buy flowers or cook romantic meals, but he always pushes the grocery cart.’: Woman claims ‘love is found’ in small gestures, learns to accept husband as is

‘He didn’t have any money, just school loans. He was younger than I was. Almost 4 years to be exact. My engagement ring was small. My proposal was simple.’

‘Please,’ they begged. ‘Would you take in a newborn, just for the weekend?’ I knew my husband would say no.’: Foster mom adopts ‘special little boy,’ is forever grateful for her son ‘who almost wasn’t’

“I could literally hear water balloons whizzing over my husband’s head. ‘What?!! Are you crazy? Heck No!’ I expected this. But I couldn’t let it go. I pictured this baby alone, in need of someone to hold him, to help him feel safe. ‘Please honey, just consider it,’ I urged. ‘It’s only for the weekend!’ Around 9 p.m., there was a knock on my door. ‘We’ll take good care of you this weekend, little guy.’ I snuggled him softly.”

‘Oh honey, you should really wait until you lose the baby weight.’ Other customers heard. It took everything in me not to cry.’: Adoptive mom shamed for ‘baby weight’ by jewelry store employee

“I was taking my son to get my wedding ring cleaned. I was feeling so amazing with my baby boy on my hip. I asked about getting my ring soldered together. The lady looked at me and made a scrunched-up face. I didn’t even want to stand there to tell her he was adopted. This was just my body – I didn’t birth him.” 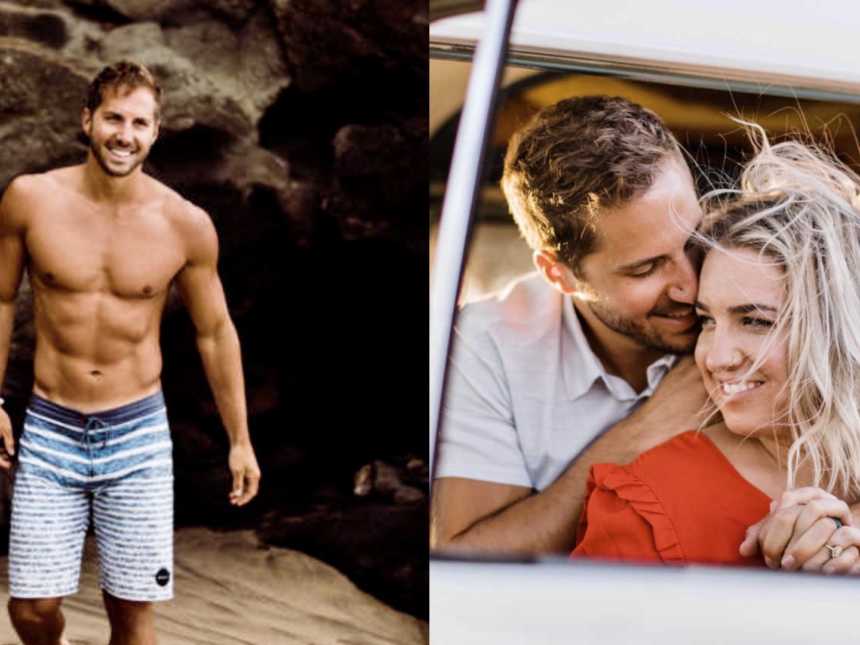 ‘They couldn’t believe I landed a guy as good looking as this – why should I, a curvy girl, get him?’: Woman says ‘we are not’ our bodies in face of judgement